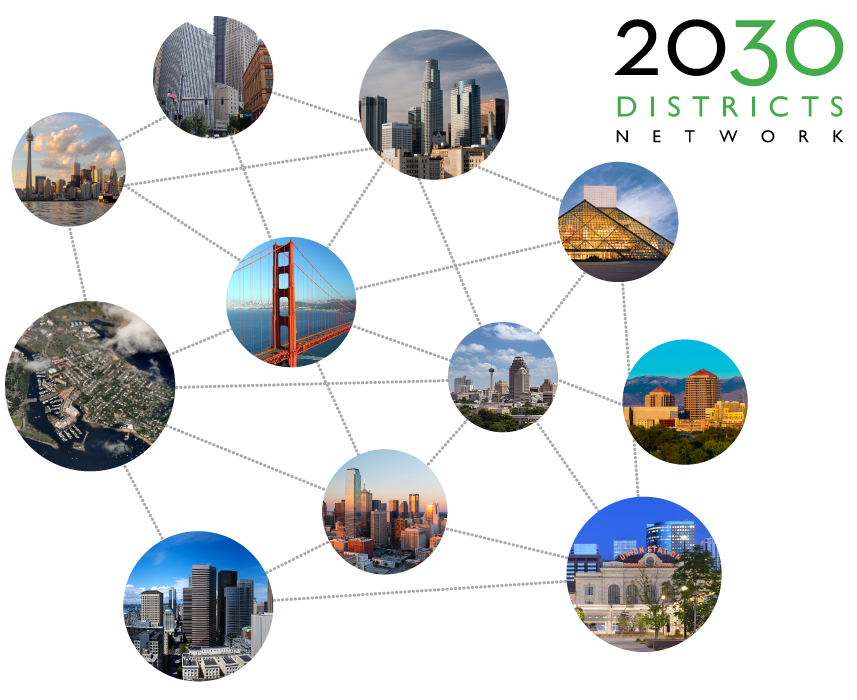 At the recent 2030 Districts Summit in Cleveland, San Antonio officially became the 11th 2030 District, piercing the previous boundary of the initial ten Districts, and further demonstrating the market readiness of the privately-led, publicly-supported 2030 Districts initiative.

“When we created the first 2030 District in Seattle, it was always intended to be a replicable model. We saw room in the green building movement for a private sector focus on uniting downtown property owners and building professionals around a common set of performance goals. The pace of the 2030 District’s growth has astounded a number of us, and we are thrilled to see it continue,” says Brian Geller, Senior Vice President of Corporate Sustainability at Citi, and Founder and former Executive Director of the Seattle 2030 District.

District-wide carbon and resource reduction goals by the year 2030 have been previously discussed in 2030 Districts as a Movement. Although 2030 Districts is a private sector led movement, the impact of federal buildings and real estate leases through public sector tenants can be significant. Having knowledgeable and forward looking owners, like the General Services Administration (GSA), and federal agency tenants inside the 2030 Districts is a bonus. The 2015 Federal Executive Order and Energy Efficiency Improvement Act will further reinforce local District implementation of the energy, water and transportation goals.

The 2030 Districts Network recently collaborated with the Urban Land Institute’s (ULI) Greenprint Center for Building Performance on data aggregation. Founded in 2009, Greenprint is a worldwide alliance of leading owners and financial institutions committed to improving the environmental performance of buildings, and its current database covers over 5,000 buildings and 1.2 billion square feet. The 2030 District building members will meaningfully contribute to the North American reporting portfolio. Participants can also build on a common language using the Greenprint platform providing analytics such as carbon calculation, online dashboards, auditability, and goal tracking.

While Greenprint has been leading in high performing commercial real estate and office buildings, the Department of Energy (DOE), through the Lawrence Berkeley National Labs, worked with Architecture 2030 to release a new Small Commercial toolkit to reach additional audiences. The DOE toolkit fills the niche of educating and assisting businesses like restaurants, neighborhood grocery stores, and other intensive energy users who may not have sustainability personnel on staff. Over time, creators of the tool will receive feedback from the 2030 stakeholders to reach an ever widening audience as Districts grow in numbers. This year, the national boundary of 2030 Districts was also pierced in a positive way:

In March of 2015, Toronto became the first city outside the United States to earn the title of an Established District. Founding sponsors, the Ontario Association of Architects (OAA) and Sustainable Buildings Canada (SBC) working with the lead sponsor and the district’s advisory board, have started to fast track positive changes in the building sector. The Canadian district formation is also a nod to recognizing the potential of downtown Toronto as a global leader in meeting climate challenges. 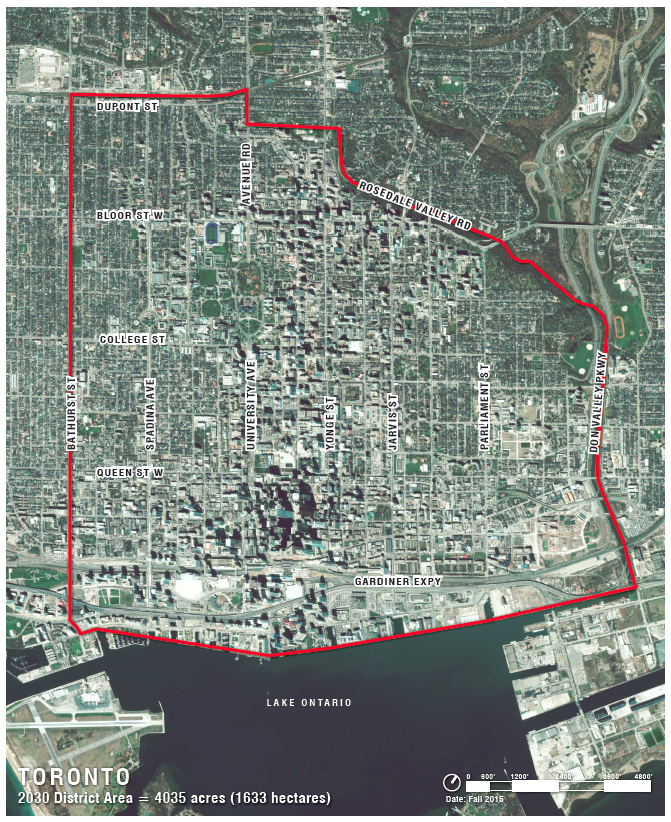 Toronto has been able to start with a sizable district, within which half a million people live and work, because the city is uniquely positioned to leverage existing local energy programs already in place. The District contains three municipal wards and seventeen Business Improvement Districts. The formation of the Toronto 2030 District serves to increase information sharing, promote district-wide benchmarking, create economies of scale, and aggregate performance data.

New construction, especially residential highrises, is accelerating in the Toronto market. As of 2013 the residential multi-story buildings pipeline is over 11,686 floors (including new buildings completed, under construction, approved, or under review). That is the equivalent of 74 CN Towers in height. The non-residential pipeline adds another 1,736 floors or 13 CN Towers. The 2030 District presents an engaging platform to establish and pursue aggressive targets while creating community cohesiveness to mobilize change. Past Toronto efforts such as healthy city will further reinforce and inform future district initiatives.

Being the first Canadian city to take the plunge, the District readily anticipates cross border translational issues of U.S. standards and other national programs yet to be adapted for Canada. The vast geographic area also makes governance and consistent membership reporting foremost issues for stakeholders. To add to the moving targets, benchmarking standards for multi-family residential buildings are still evolving.

The silver lining lies in the ready support from the region’s design industry, architects’ association and the OAA+2030 series. It puts a spotlight on Toronto’s sustainable design expertise and in turn facilitates meaningful conversation between client, owner and consultant in all new construction and major renovation projects in the District.

“In a large city like Toronto, conservation at the District scale is met by the shear complexity of balancing numerous priorities, the diversity of building types and capabilities, and the number of competing programs. The Toronto 2030 District has the opportunity to play a crucial role of clarifying the path through a combination of stakeholder engagement and comprehensive data.” says Jeff Ranson, Executive Director of the Toronto 2030 District.

Dallas is the third largest city in Texas with a population of 1.2 million. The Dallas 2030 District establishment is part of a strategic initiative at the South-central Partnership for Energy Efficiency as a Resource (SPEER). The newly formed district, the first in Texas, benefits from SPEER’s fiscal sponsorship and technical assistance to successfully meet its targets and to grow from its current 13 million square feet portfolio. 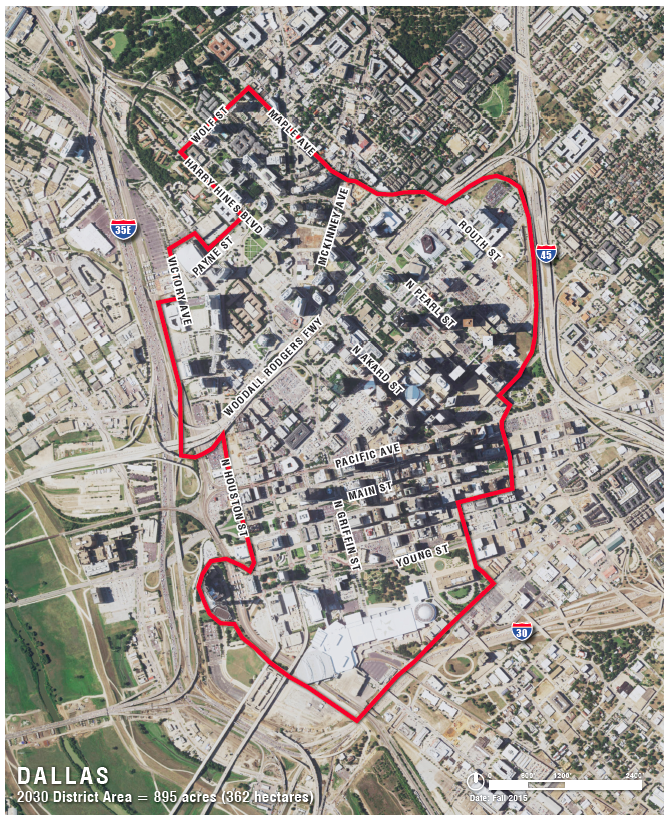 The District Leadership Council follows the model of a working board, augmenting areas of outreach, fundraising, training and benchmarking. To add clarity, there are heads for each of the 2030 District sector groups: owners, professional stakeholders, and community stakeholders. Like its peers, Dallas chose to start with energy benchmarking, then water and transportation in that order. New training is being designed every month and membership recruitment is going strong. Together with large property owners, such as the AT&T Performing Arts Center and the Federal Reserve Building, and real estate managers, such as Granite Properties and Peloton, the City of Dallas also joins a critical partner.

“We have a healthy, vibrant, and bustling economy. This is where the Dallas 2030 District plays a crucial role and has the opportunity to incorporate sustainability into our economic edge. We continue to work towards that goal by using the District as a launching pad for innovative ways to lead by example,” says Salima Moolji, Executive Director of the Dallas 2030 District. 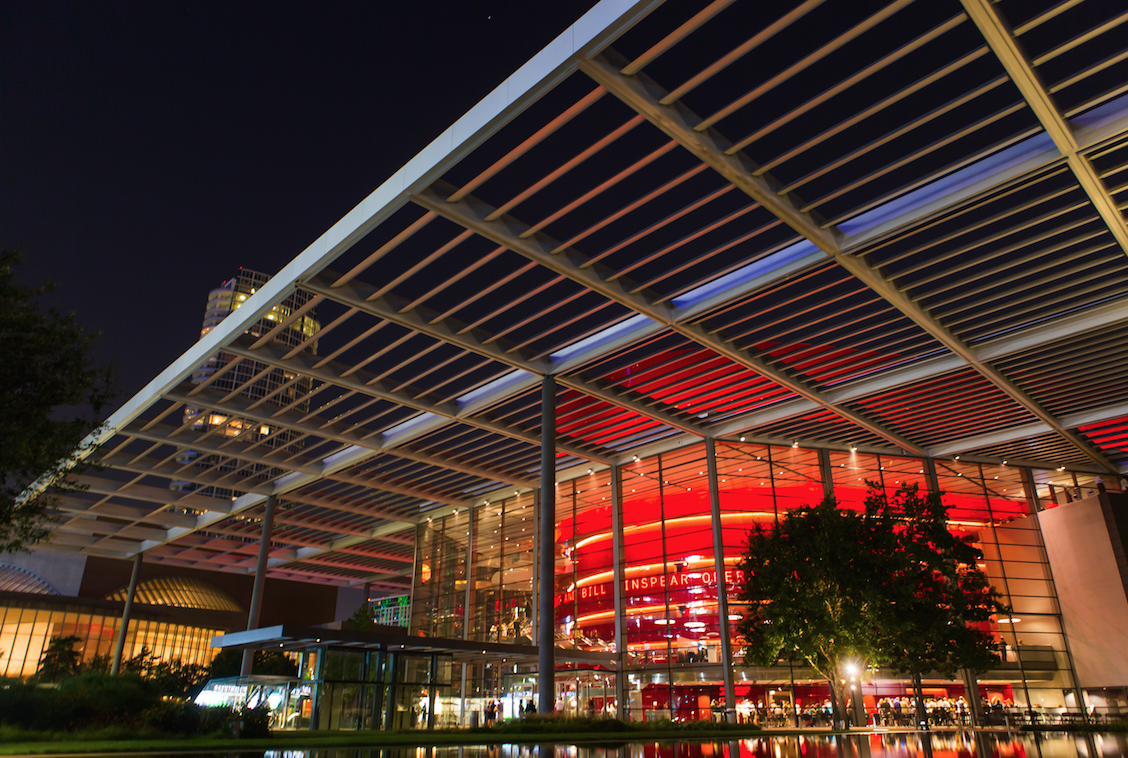 In thinking about the 2030 Districts Network, one conjures up the image of innovators constantly pushing the envelopes. These multiple “envelopes” are a product of diverse district formations as well as the cities’ geographic and political context. For example, the water response from droughts in the west is quite different from increased frequency of storms elsewhere in the country. The availability of alternative financing, like PACE, in states and counties through legislative approval could directly accelerate energy upgrades and retrofits to meet 2030 goals. High performers in the above Districts such as 500 N Akard, 1601 Bryan Street, and 25 York Street will continue to be in a position to lead.

Climate resiliency affects cities at different levels: learning from each other also means continuous innovation, while leaving no blind spots behind. Other topics on the horizon include zero waste, health and wellness. The maturing of 2030 Districts offer building owners a set of tools to tackle district issues that ultimately affect the buildings’ value, operating budgets, and occupants’ comfort and productivity. Innovation in clustering district buildings translates to higher performing real estate and a city with stronger economic fundamentals.

“When Ed Mazria first framed the 2030 Challenge, it helped all of us focus on achieving steady, incremental milestones toward this important goal of a carbon neutral built environment,” said Rick Fedrizzi, CEO and Founding Chairman, U.S. Green Building Council.   “With the addition of the 2030 Palette, and now the full implementation of 2030 Districts, we’re scaling up our impacts and broadening community-wide understanding of the critical importance of private/public partnerships in achieving our shared goals. The continuous innovation and improvement in LEED has been one of the fundamental building blocks of our progress to date to reduce energy and water use and greenhouse gas emissions in buildings and communities across the planet.  2030 Districts reflects our belief that city scale is our best next milestone to a thriving planet.”