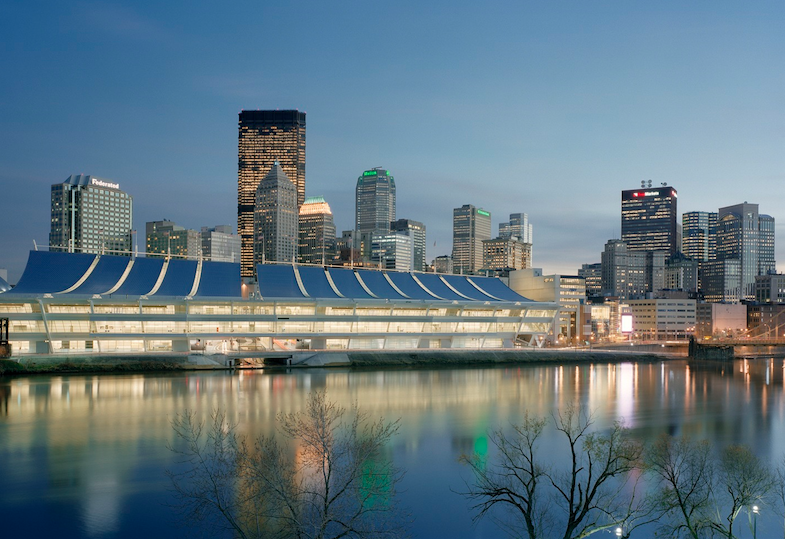 Pittsburgh is one of 9 existing districts committed to 2030 reduction goals.

Architects Pollute. That’s how Ed Mazria got the attention of Metropolis Magazine in 2003 – and it’s a message they plastered on their October cover. Since then, Mr. Mazria has taken the message that buildings are major contributors to climate change (using nearly 48% of all the energy nationally)—and created a solution set for how the building industry can create and operate buildings that become part of the solution for how the world reduces its greenhouse gas emissions. 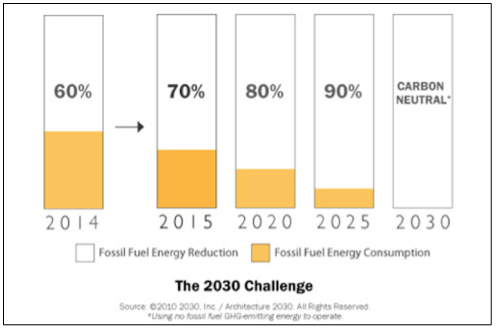 Carbon neutral buildings by 2030 seems achievable, but the way it’s illustrated gives some building owners pause. “Does that mean my building uses no energy in 2030?” Of course not. People live, work, learn, and play in buildings; that’s their function. If buildings don’t meet their purpose, none of us are achieving our primary social goal of shelter, let alone the performance goals for that shelter as set out by The 2030 Challenge. 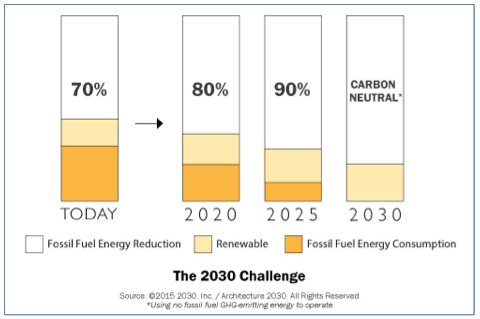 All of this begs the question: “So what is my baseline? What is my reduction measured below? Who am I being measured against?” Because all energy use reductions are below a national baseline, the details of how these reductions are measured and compared is tremendously important.

If you’re an architect, urban planner, or designer looking for tools to assist you in helping new or existing building achieve The 2030 Challenge, there are tons. Three with “2030” in their names include:

Whether you’re a designer or not, you’re likely thinking, “Wow, this is great and I want every new building I work on to achieve these goals. However, is The 2030 Challenge for new construction enough? Even if every new building or major renovation being designed today adopted the 2030 goals, would we achieve what we need to as an industry?”

In 2009, Brian Geller didn’t think so. Instead, he drew a map of all the buildings on Seattle’s district steam system and ultimately created the Seattle 2030 District, which is now one of nine 2030 Districts in North America. 2030 Districts create boundaries around communities of buildings (mostly downtowns, but not exclusively) and incentivizes private / public / nonprofit partnerships to work collaboratively to get every building (new or existing) in the boundary to commit to the goals of The 2030 Challenge.

“In under 5 years, this grassroots application of The 2030 Challenge has yielded over 200M sqft of existing buildings in 9 existing 2030 Districts committed to 2030 reduction goals.”

In under 5 years, this grassroots application of The 2030 Challenge has yielded over 200 million square feet of existing buildings in 9 existing 2030 Districts committed to 2030 reduction goals. As a result, it’s no longer just new buildings across the country who are attempting to achieve carbon neutrality by 2030; there are now also over 780 buildings in Cleveland, Dallas, Denver, Los Angeles, Pittsburgh, San Francisco, Seattle, Stamford, and Toronto working toward 2030 reduction goals as well.

Because they mostly include existing buildings, The 2030 Challenge applies to existing buildings a little bit differently. In short, existing buildings commit to working towards 50% reductions (below baselines) in energy use, water use, and transportation-related emissions by the year 2030, with new construction still achieving carbon neutrality by 2030. (More details on 2030 District measures next time.)

So, what’s the moral of this 2030 glossary? The year is important, so let’s not forget it. By 2030, all new construction and renovations should be carbon neutral. Existing buildings should be using 50% less energy than their 2003 peers did. Products should have carbon footprints equivalent to half that of their peers. There are lots of 2030-specific tools to help building industry stakeholders of all types achieve these goals. Whether it’s the 2030 Palette, AIA + 2030 education series, AIA 2030 Commitment, or 2030 Districts, if you’re not doing anything today with building energy performance, the time for excuses is over. Make a commitment, start measuring your performance towards it, and work towards achieving your 2030 reduction goals. You can get there, your buildings can get there, and we can (and must) all get there together.

Aurora Sharrard, PhD
Dr. Aurora Sharrard is Vice President of Innovation for Green Building Alliance, one of the U.S.’s oldest regional green building organizations and a USGBC Chapter. With nearly 15 years of experience in design and construction, Dr. Sharrard brings both pragmatic and innovative solutions and ideas to projects working to achieve more. Dr. Sharrard holds a Master’s and PhD in Civil and Environmental Engineering with an emphasis in Green Design from Carnegie Mellon University, as well as a Bachelor’s degree in Civil Engineering from Tulane University. She is a LEED AP BD+C.