Beyond EUI: Linking Energy and Economy in Buildings 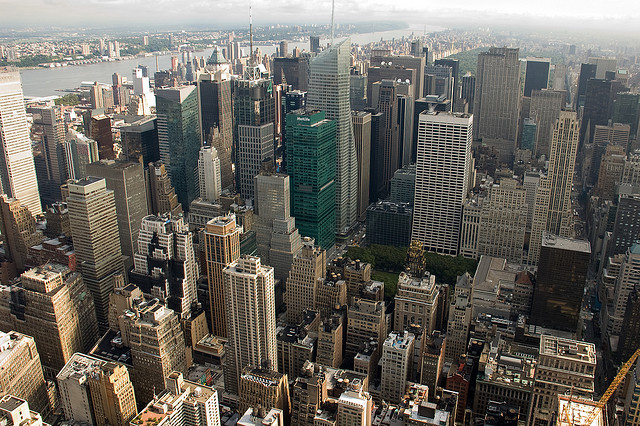 From shortening ambulance routes to identifying hazardous waste sites, ‘big data’ is increasingly being used by municipal governments and policymakers to inform their decisions, improving safety, health, and quality of life in our nation’s cities. In the world of energy and building policy, the ‘big data’ that has people talking is benchmarking data, particularly that provided through New York City’s groundbreaking Local Law 84.

For the building design and operation communities, Local Law 84 made waves. For the first time, the city’s largest buildings – all of those over 50,000 square feet – were required to disclose their source and site energy consumption, as well as water use, and EnergyStar scores. The disclosure of this data spurred conversations between engineers, real estate developers, building owners, and the environmental community. Even the mainstream news media developed an interest in building efficiency; headlines in December and July (‘City’s Law Tracking Energy Use Yields Some Surprises’ in the New York Times, and ‘Bank of America’s Toxic Tower’ in New Republic) introduced building energy consumption into the public consciousness.

In newspaper articles, blogs, and quiet meetings between members of the real estate and building communities, conversations have circled around the initial conclusions that the Local Law 84 report seem to present: new buildings use more energy than older buildings, commercial office building energy consumption varies across an enormous range, and use, and – most surprisingly – LEED buildings aren’t ‘delivering’, in some cases using more energy than their older, outclassed counterparts. However, these findings are based on metrics that consider only one piece of a much larger conversation about buildings, energy, and the ways that energy consumption shapes our urban environments.

EUI (Energy Use Intensity or Energy Utilization Index, depending on who you ask), is the most widely-used measure of building energy consumption – and the increasing visibility and understanding of this metric is fantastic. Building owners, operators, and tenants are increasingly discussing building EUIs, supporting greater transparency and an enriched conversation around energy consumption.

“We need to truly understand the relationship between the input of energy consumed, and the primary outputs that commercial buildings are designed to provide: commerce.”

Despite all of the benefits that EUI transparency is bringing, this metric doesn’t go quite far enough in allowing us to compare the relative efficiency of buildings, particularly in comparison to one another. Instead, it measures the relative intensity of energy consumption in a building – kBtu/SF, a metric most useful for comparing a single building’s energy performance over time. This distinction makes EUI an inappropriate proxy for efficiency; we need a metric that acts like ‘efficiency’, with both an input and output. We need to truly understand the relationship between the input of energy consumed, and the primary outputs that commercial buildings are designed to provide: commerce.

Still, EUI is widely used as a first-pass efficiency metric. In our work, clients and design teams often ask how efficient a new building is going to be, and expect a projected EUI in response. Operators of existing buildings call their buildings more efficient than their neighbors based on EUI. One colleague is already making claims that her new commercial office building will be the most efficient in New York City based on only predicted EUI. How did this happen? Was it the folks at EnergyStar? The 2030 Challenge? The USGBC? Who took a metric for intensity and called it ‘efficiency’? This led us to think very closely about what is “efficiency”, and how can we enrich a conversation beyond environmental-only metrics. We found ourselves asking – what would a real building efficiency metric look like?

Fundamentally, efficiency measures the ratio of inputs – in our case, fuel – to useful outputs. For commercial buildings, the inputs are clear – fuel, in terms of total source energy (EUI) . The challenge is to identify the most appropriate outputs against which to measure. For our study, we chose to define outputs as the contributions made by a building’s tenants to the local commercial economy, allowing for the development of a Commercial Building Efficiency metric which describes the ratio of energy inputs relative to economic outputs for a given building and its tenants.

Working with a team of economists from Buro Happold’s consulting arm, Happold Consulting, we developed a methodology to index the economic contribution of a building based on its tenant types. This metric, presently called the Building Economic Intensity Index, has been created from publically available data, which has been normalized based on several accepted economic best-practice multipliers. Combining the recently released LL84 data with CoStar Tenant® datasets allows for an understanding of the relationship between energy consumed and the building’s economic productivity, weighted by tenant types and their relative economic impact. Further, this information can also be organized to understand trends in “building economic contribution per energy consumed” based on building age, tenant groups, LEED certification levels, and submarkets or ZIP codes.

The graph below maps the basis for BEEC: the relationship between ECONOMY (our new economic contribution metric BEII) and ENERGY (Source EUI). 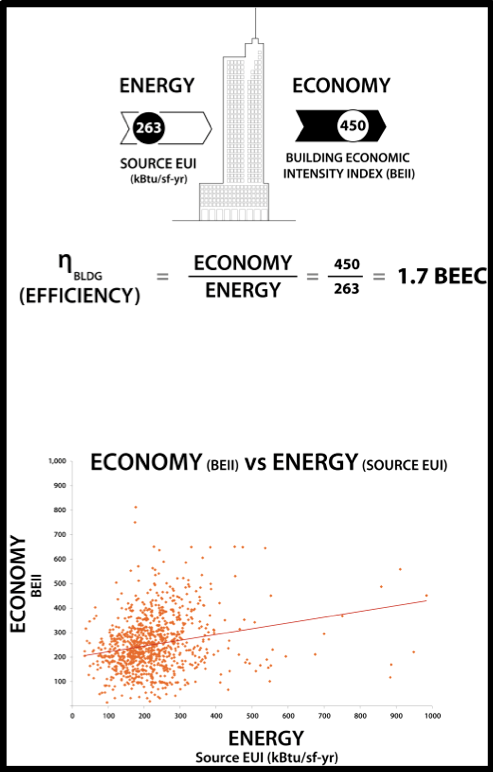 Whether the BEEC can be used as more than a novel metric remains to be seen; this study was made possible by the availability of both the Local Law 84 data and a substantial, highly accurate commercial database of building tenants. Given the trend towards similar energy disclosure policies in other major cities, it will be possible to complete similar analysis for San Francisco, Philadelphia, and others in coming years. In the meantime, the results of this study can be used to spur a broader conversation about the relationship between economic and environmental impact, and how that relationship should influence the City’s energy policies by providing a better understanding of the relationships between energy consumption and economic output.

We will be presenting our concept-level work on this study at Greenbuild on Wednesday, November 20, and will discuss how this definition of commercial building efficiency can be used to move the conversation forward. We very much look forward to your feedback and thoughts.

Is BEEC the metric for building efficiency? We’re not sure – but if nothing else, it’s a good start. Because in a city where 75% of carbon emissions come from buildings, don’t we need one?