Water, Energy, and Urban Development in Stockholm: The Case of Hammarby Sjöstad 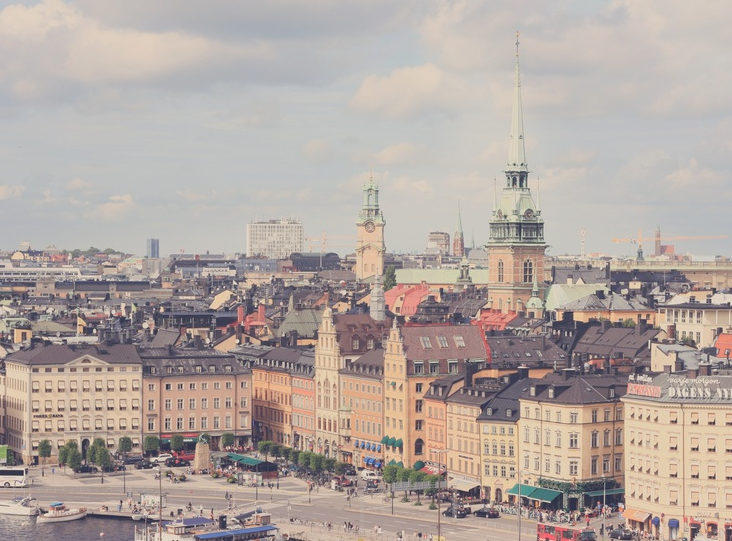 Situated in the Södra Hammarbyhamnen and Södermalm districts of Stockholm, the newly constructed development Hammarby Sjöstad is a prime example of integrated solutions for sustainable urban development. The neighborhood itself is situated on the old industrial and harbor area near the Lumafabrik—a former brownfield site. The design of the district is based on the Symbiocity principles, which encourage the integration of multiple urban systems in order to maximize sustainability. For Hammarby Sjöstad, this is manifested primarily in their solutions for water, waste, and energy.

One of the primary goals of the development is to reduce the water consumption of its residents from Stockholm’s average of 200 liters/day/person to just 100 liters. Furthermore, the water that is used gets maximized to its full potential. For example, wastewater from Hammarby Sjöstad is treated in two major wastewater treatment plants. One of these plants, the Sjöstadsverket, uses biological, physical, and chemical processes to collect and treat wastewater from neighborhood residents alone. The heat from the wastewater is used to create heating, and the chilled water can also be used for cooling. Next, the concentrated sewage sludge is processed and refined into biogas, which is used to fuel buses and 1000 gas stoves in the community. The remains are then used as fertilizer. Natural water sources, such as stormwater, rainwater, and meltwater, are treated in lush water terraces, infiltrated in soil and green roofs, or channeled into multiple canals that run throughout the development and recharge groundwater stores.

When it comes to solid waste, the residents of Hammarby Sjöstad allow very little to go to landfill. The primary principle of the waste management system in Hammarby Sjöstad is that garbage is an energy resource, not waste. All combustible materials are converted into district heating and electricity. Excess food becomes fertilizer or biogas that powers vehicles throughout the development. The recycling system is extensive, and includes paper, glass, metal, hazardous waste, and electrical products. All housing units have automatic vacuum waste collection systems, which are shown in the photos to the right (blue for newspaper, orange for “other waste”, and green for food waste). These powerful chutes force garbage through a series of underground tunnels at up to 70kmh and send it to central plant to be burned for district heating. All Hammarby Sjöstad residents have access to the chutes right outside of their homes and some even have them inside.

Of course, just having the chutes is only one part of the equation. The behavior of the residents is the key to making such a system work. The utility has to ensure that every person is putting the right type of waste in the right chute, otherwise the material cannot be used as an energy source. For example, the food waste must be 95% pure in order to be used for biofuel. When the chutes were first implemented, many people would throw whatever was convenient down the hatch, resulting in only 80% purity. In order to stop this behavior, the city added locks to the food bins, so residents were forced to be intentional about what they placed in the food waste chutes. After this change, the purity went back up to 95%, and the waste was again viable for biofuel.

As you’ve probably noticed by now, there is a common thread in all of the systems mentioned so far: energy. The water and waste systems all have the additional benefit of providing energy sources for the area, in addition to their traditional functions. Hammarby Sjöstad stands out from many places because much of its energy comes from its own residents. In fact, by the time it is all completed in 2018, inhabitants will produce 50% of the energy sources that power the neighborhood. Not only will energy come from treated wastewater and combustible waste, but it will also come from solar panels throughout the development. These photovoltaic cells have been installed on both facades and roofs, and are used for electricity generation as well as water heating. The combination of these energy sources gives Hammarby Sjöstad a diverse, clean, and sustainable energy resource profile.

While very impressive, it is important to point out that Hammarby Sjöstad is not entirely unique in its sustainability strategies. Rather, it is more like a microcosm of the greater Stockholm area. The city has been a leader for green growth, with an entire fleet of biogas and biodiesel-fueled buses (pictured here), and efficient commuter rail and underground transportation with expansion in sight.

But Stockholm wasn’t always so green. Before the oil crisis of the 1970s, Sweden was one of the most oil-dependent countries in the world, though they didn’t have any of their own. Today, excluding cars, only about 10% of their energy comes from fossil fuels, and they are on a quest to become an oil-free nation. This amazing city is a great example of how local concentration of solutions can be extremely beneficial. From the intense focus that localized policy can provide, maximum benefits can be achieved. Although solutions for the 800,000 residents of Stockholm cannot be widely applied everywhere, the city is still an example for some successful urban development techniques.

Adrienne Johnson
Adrienne is a recent graduate from Stanford’s undergraduate Civil Engineering program, and a current student in the university’s Sustainable Design and Construction Masters program. At the USGBC, she is a MAP Sustainable Energy Research Fellow, investigating water and energy efficiency and the role of sustainable building projects in the California water crisis.